Canadian Sikhs Reflect on the Divinity, Duality and EcoSikhi

Sikhs of BC’s Lower Mainland invited the Sikh Research Institute (SikhRI) to bring their programming to Canada to educate, inspire and engage the local community. The weekend’s events, from March 26-28, 2010, addressed a broad range of topics which were presented through various formats, including radio shows, workshops and Gurduara assemblies

Friday morning began with a stirring discussion on “ The Harjinder Thind Show” on RedFM. Harinder Singh, SikhRI’s Chief Programming Officer, went on air to discuss the topic of “Panjab Today”. Listeners were moved to call the show, and expressed views ranging from anger to helplessness to hope. Discussion of the topic did not end at the radio station. That evening, Harinder appeared on BC’s only South Asian mainstream news broadcast station, Omni TV, allowing more viewers to tune in and comment on “Panjab Today”.

Saturday’s schedule involved a day-long interactive workshop, “The Guru: Connecting with the Divine Light”, and was held in a lecture hall at Kwantlen Polytechnic University. The sangat of BC specifically requested the session, and it was made possible with sponsorship support from the Khalsa Credit Union. Facilitators guided the nearly 80 participants through three sessions: What is Guru? Meaning, Role & Importance, The Prophet-Genius of the Ten Nanaks: Attributes, Lives & Contributions, and Guru Granth & Guru Panth: Origin, Development & Institution.

Paul Sidhu of Abbotsford remarked on the workshop: “This program benefited me by opening my mind to which direction I need to take to become a better and more educated Sikh. The main change it had on me is it made me aware of the corruption and the misled teachers that are out there. I am aware that I need to go back to the source and educate myself and interpret it myself.” 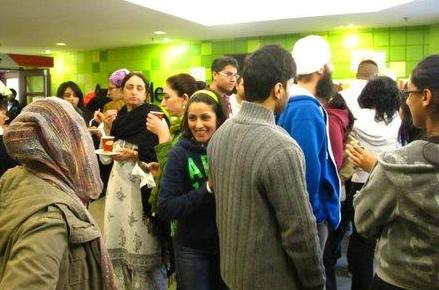 Another participant, Johnny Kang, reflected: “This program is very empowering . . . blowing past the labels and confusions the current Sikh nation is facing. Everyone was involved and catalyzed into individual journey of “Am I a Sikh?” and “What is a Sikh?” Beautifully delivered reverent information of the real life present moment lives of our Sikh Guru tradition and relevance of Khalsa Panth. Always an awakener when taking part in SIKHRI events.”
Saturday night’s events coincided with the globally recognized Earth Hour, which involves people turning off their lights for one hour to save resources. In marking the occasion among the Sikh community, Harinder Singh took the stage at Sukh Sagar Gurdwara in New Westminster to deliver a compelling speech titled, “ Sikhi on Social Responsibility and the Environment ”. He urged the sangat to reflect upon how our lives and actions, both as individuals and as a community, affect the environment and the socio-economic experiences of people around the world. He cited numerous references in Gurbani where the Gurus have reminded Sikhs of the interconnectedness of the enviro-eco systems of the world. The presentation was timely and well received; so much so, that Harinder presented again on the same topic the next morning to the sangats of Guru Nanak Sikh Society Gurdwara and Dasmesh Darbar Gurdwara in Surrey.

There is not much awareness of these issues from a Sikhi perspective and I believe people were very inspired to see that our responsibility to the environment is very central to the Gurus’ teachings,” said Baljinder Kaur, president of SikhRI Canada.

During his speeches at the Guru Nanak Sikh Society and Dasmesh Darbar Gurdwaras, in addition to environmentalism, Harinder Singh spoke on Bhagat Singh, commemorating the anniversary of his martyrdom. He highlighted the necessity of Sikhs and Panjabis to own Bhagat Singh’s struggle, heritage and martyrdom as a significant and inspirational part of history.

The weekend came to a close with a radio discussion on Sher-e-Punjab’s Dilaan di Saanjh, which is hosted by Kuldip Singh. The segment gave the community a moment to thread the issues of the weekend together.

SikhRI also travelled to the east coast of Canada for two events over the weekend of April 10-11. On Saturday, 30 participants gathered at the University of Toronto Mississauga for a Saneha on the topic of “Asa ki Var: Transcending Duality”. The program explored the structure and significance of Asa ki Var as well as offering guidance for transcending duality in thought, conduct and society.

The program was benefited by the excerpts of bani that were used with translations. The connection between the instructor and the attendees was definitely there, which added to the aura of the seminar. I will look at this bani with a different eye, with the new information I have learned,” said Harjote Singh, of Brampton.

On Sunday, Harinder Singh spoke on the topic of “Celebration and Thankfulness” at Shiromani Sikh Sangat Gurdwara.

As an individual and her family invests intellectually, socially and financially to build academic qualifications towards a successful career, it requires relentless pursuit in developing a relationship with the Divine. What is needed is a disciplined and purposeful physical, mental, and financial commitment to be with the Force, the One Reality,” said Singh of the program’s focus.

SikhRI is also pleased to announce that after this recent visit it will be bringing on a coordinator for the Greater Toronto Area (GTA).

Kulvir Singh will act as the main contact for SikhRI event scheduling and programming. Kulvir said that he looks forward to working with SikhRI to bring programming to Toronto and the surrounding area and it is his hope that a coordinator for the eastern provinces will allow SikhRI to schedule activities similar to those they frequently host in BC. He encourages members of religious, cultural and student organizations to investigate what SikhRI has to offer and to be in touch to discuss future visits and programming options.

SikhRI is made possible by hundreds of volunteers, donors, team members and educators—all just like you. Help us illuminate Sikh paths throughout the world.